Medicine for the World 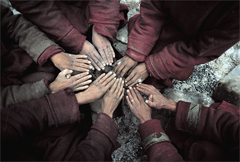 This recent post from Andrew Olendzki in Tricycle Magazine takes an interesting slant on a classic Buddhist story. It’s too easy to think the world’s problems are too big for any one of us to address. Or that massive humanitarian crises – like the recent floods in Pakistan – are too far removed from us to do anything about.

But the world we inhabit is the product of our collective actions, and it’s up to us to take responsibility. Taking care of each other is at the core of what practice as a Buddhist is about. I’m taking this lesson seriously. I hope you will consider doing so as well.

Medicine for the World

If we do not take care of each other, who will?

ONE TIME WHEN the Buddha was walking among the dwellings of his monks, he came across a monk who was very ill with dysentery, lying alone in his own excrement. He asked the monk why none of the others were caring for him and was told that he was of no use to the other monks, so they left him to cope with his illness alone. The Buddha immediately sent his attendant Ananda for a bowl of water and together they washed the monk and raised him onto a bed. Then the Buddha called together all the monks of the community and asked why this monk had been left unattended in his distress. He was given the same answer: “He is of no use to us, Lord.” (Mahavagga 8.26)

“You monks no longer have mother or father to care for you,” the Buddha said to them. “If you do not care for one another, who else will care for you?” He then used the occasion to lay down one of the 227 rules for the monastic community, enjoining the monks to care for each other in times of illness. It is a poignant story, revealing a side to the Buddha seldom seen in the Pali texts. More importantly, I think it has something to say to us about the situation we all find ourselves in today, and it can offer inspiration and guidance on how we can best get ourselves out of difficulty.

Surely one of the main problems we face, as a species and as a planet, is that we are lying in our own excrement. All the waste products produced by our consumption, from garbage and debris to chemical toxins and exotic poisons, are oozing out of us and soiling the environment we inhabit. And what the Buddha says about everything else surely applies here: Nothing happens without a cause. Things are the way they are not because of chance or the will of a deity but because people have acted in particular ways and generated particular consequences. The world we inhabit is the product of our actions, which are themselves reflections of our minds.

We may also, like the early Buddhist community, be on our own. The Buddha has suggested that we are without a mother and father to take care of things for us. Mother Earth, once thought to be all-forgiving and capable of absorbing any abuse we could heap upon her, is not the infinitely benevolent resource we thought she was. As we learn of our own mothers at a certain point of maturity, Mother Earth can and does get worn down by giving and forgiving in the face of our persistent demands. And our Father who is in heaven, though perhaps immensely old and lord over a host of devas (as the Buddhists view him), is nevertheless subject to the laws of karma and is not sufficiently omnipotent to make it all work out for us in the end.

If we do not care for one another, who else will care for us? Who among us has the right to say of another, “He is of no use to us?” For better or worse, whether we like it or not, we are all in this together. Learning how to care for one another is a central part of the path and of the practice.

As the Buddha laid down the monastic injunction for the monks to care for each other, he placed the responsibility first upon the ill monk’s preceptor, then upon his teacher, and finally upon all his companions. Transposing this to our collective secular situation, we might say that we look first to our elected officials, as the dominant authority in our society, to take responsibility for helping clean up our mess and healing ourselves. If they prove inadequate, then it is up to the many other people in positions of influence to take the lead and show the way. If they too cannot manage to do so, then it is up to each and every individual to step up and personally lend a hand. There is no one else to whom the duty can be passed.

The filth of dysentery is washed away with clear water. The toxins of greed, hatred, and delusion oozing from the human psyche are cleansed with generosity, kindness, and wisdom. Once we’ve been lifted from the dirt onto a place of greater purity and dignity, we can begin the gradual process of healing. The Buddha, in his role as physician, has laid out in the Four Noble Truths a protocol for recovery: Identify the symptoms, understand their causes, use this knowledge to remove the causes, and then diligently follow a detailed regimen for effecting the cure.

But the medicine can only cure if it is taken. What if we administer the medicine of the dhamma to one another, each lifting the other up and showing compassion for one another’s suffering? Even those we do not particularly like or understand; even those who are “of no use” to us; even, dare I say, with our own hand?

WHATEVER MEDICINES ARE FOUND
IN THE WORLD—MANY AND VARIED—
NONE ARE EQUAL TO THE DHAMMA.
DRINK OF THIS, MONKS!

AND HAVING DRUNK
THE MEDICINE OF THE DHAMMA,
YOU’LL BE UNTOUCHED BY AGE AND DEATH.
HAVING MEDITATED AND SEEN—
[YOU’LL BE] HEALED BY CEASING TO CLING.

Andrew Olendzki, Ph.D. , is executive director and senior scholar at the Barre Center for Buddhist Studies, in Barre, Massachusetts. He is the editor of Insight Journal.