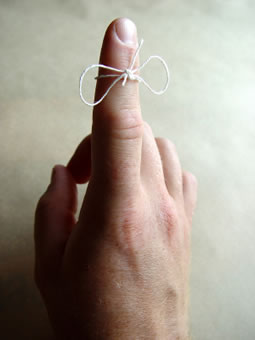 How often do we say that? And what’s in that blank? Starting meditation, writing a book, working on a creative hobby? Why is it so hard to get to those things we wish we could?

I’d like to share with you the story of how my client James (not his real name) dealt with this problem. James is in business for himself as a therapist and freelance journalist, and is also a husband, dad, and promising poet. So juggling many roles and projects is a way of life for him. He had many things he wanted to do – create a mindfulness training seminar for therapists, build up his professional reputation, write poetry. Oh yes, and file his taxes. And yet like many of us, he’d find himself at the end of most days having never gotten to any of those things.

Things started to change when he zeroed in on an important point: recognizing the difference between Urgent vs. Important tasks. Urgent tasks call for our immediate attention, such as crises, deadlines, ringing phones, and email alerts. They’re the things we can spend our entire day chasing, and still feel like we’ve not gotten much accomplished. Important things, on the other hand, don’t grab at us so much but, well, they’re Important. They’re of high value to us – like those projects that James wanted to get to. They’re the things we feel good about accomplishing. 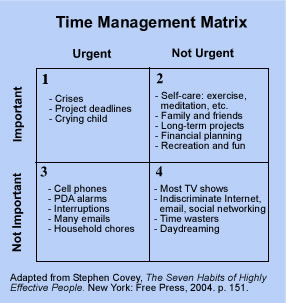 I first learned of Urgent vs. Important from Steven Covey, in his classic book The Seven Habits of Highly Effective People. All of the tasks we face fall into one of four quadrants, defined by whether they’re Important or Not Important, and Urgent or Not Urgent. I’ve reproduced his diagram here, updated with 21st century examples.

The trap most of us fall into is chasing tasks in the Urgent column (quadrants 1 and 3), then being so tired afterwards that we spend what time we have left doing what’s Not Important and Not Urgent (quadrant 4). What’s Important and Not Urgent (quandrant 2) gets short shrift — until they become Urgent, in which case they turn into Crises (and move to quadrant 1), and get done in a rush.

Why does Urgent grab us so much?

So let’s think about this a moment. Why is it that Urgent tasks and inanimate objects grab a hold of us so much? Isn’t that kind of strange? Why do we feel so driven by them, even when they’re Not Important, that we do them in favor of what’s really Important to us?

Using his mindfulness skills, James noted that Urgent things have a particular strong effect on us. When we’re confronted with something Urgent, we feel restless, anxious, jittery – and in more extreme crises we get adrenaline rushes. We may not realize it, but that’s how our mind figures out that something is Urgent. It’s a real physical experience — a sort of tight, nervous feeling in our bodies. Pay attention next time your phone rings and you’ll see what I mean. It’s mildly unsettling. And our immediate response is to try to make that feeling go away by jumping on the task. But what’s really driving us to act is our own discomfort (i.e. a creation of our minds). Very often the task itself isn’t very significant at all!

So then James came up with that previously-mentioned short list of what’s TRULY important to him. Then he cleared his calendar during his most mentally alert time of day to work on them. First thing in the morning, he’d shut off his email, Twitter, Facebook, and phone, and concentrate for an hour on one of those projects. After one week, he was surprised and very pleased that he had spent the same number of hours at work, and had a much greater feeling of accomplishment than he did before. And by mindfully focusing on one thing at a time, he found himself being much more effective. Yes this took discipline, but the payoff was great.

And what about all those Urgent but Not Important things he set aside? They got done anyway. They always do, don’t they? The natural anxious energy of Urgent spurred him to get them done. He mindfully channeled Urgent energy to help him get them done.

So the key is being mindful of that anxiety. It turns out that type of energy will always be with us. We can’t make it go away so why fight a losing battle? Isn’t it much better to let the feeling be there and mindfully choose when to set it aside vs. when to use it, whichever is to our advantage?

James had a wonderful image of those Urgent but Not Important tasks as goblins jumping up and down all around him. He mentally banished them all outside his office door and told them to go wait their turn. Then he’d let them in, one at a time, when he was ready for them. He didn’t let them bully him around.

James noticed something else, too. When he steadily worked on his Important but Not Urgent tasks, they never had the chance to become Urgent. That’s how he finished his taxes before the deadline, without having to cram it all in at the last minute. Working this way has made his days feel more even-keeled and orderly because he has fewer Urgent things breathing down his neck.

So this is a great lesson in applied mindfulness. When we’re feeling driven by our day-to-day tasks, it’s a good time to stop and reassess. Are they Important or just Urgent? And what’s really driving us? In most cases, I’d bet it’s not the tasks themselves, but our own anxiety about them. We have the power to set our own priorities and stick with them. We can move ourselves forward in the direction WE (and not the goblins of Urgent) want to go.